Tag: Andy Farber and his Orchestra

I get a lot of music for my consideration, nearly 400 so far this year. Almost all of them are notable for something, and I’d like to give them their due. So, every week, more or less, I’ll offer hot takes on the releases of the preceding seven days. This week was exceptionally busy with 13 new releases, three of which arrived on release day. So this week’s reviews will be spread over two posts with the second scheduled for . . . whenever I can listen to all of them. 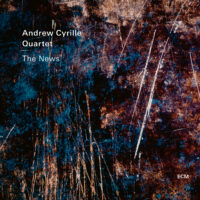 It seems like every cooking show I watch (and I watch a lot of them), features extreme close-ups of chefs using tweezers to lovingly position tiny perfect garnishes on their exquisitely refined food. At 81, drummer Andrew Cyrille does much the same thing with every cymbal stroke or brush of his snare drum. Much like fellow drum mystic Paul Motian did in his late career, Cyrille has pared away all excess and embellishment leaving a style where every gesture feels essential. On “The News” (ECM Records), he reconvenes the quartet from 2016’s “The Declaration Of Musical Independence” with the crucial substitution of Cuban-born pianist David Virelles for synthesist Richard Teitelbaum. Virelles,who tapped Cyrille and bassist Ben Street for his 2012 Pi Recordings debut, “Continuum,” is notable for what he doesn’t play; the space he leaves in this late-night music music creates an atmosphere that is haunting and more than a little haunted. Frisell, himself a master of musical space, contributes three compositions, including the bouncy, Ellington-inspired “Go Happy Lucky.” His rapport with the leader is complete, as is Street’s. “The News” is the kind of recording you can listen to fifty times and never get to the bottom of it. 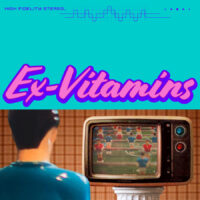 I want to know: who the hell is Ex-Vitamins, the mastermind behind this eponymously titled, self-released surprise package of hooky, club-ready audio MDMA? The publicity materials hint at a New Jersey-based keyboardist and producer with friends “who once referred to David Bowie, St. Vincent, Paul Simon, Taylor Swift, Demi Lovato, or others as the boss.” Ex-Vitamins lists them in the credits—and why not, when the names are as glossy as drummers Mark Guiliana and Nate Smith, bassist Tim Lefebvre and saxophonist Ben Wendel? Recorded during 2020 as individual parts assembled by Ex-Vitamins, the music is throbbingly rhythmic and as vivid as a Yayoi Kusama installation. At 5:30, the semi-abstract “Wendy” is the longest cut, while the shortest, “Ism,” is two-and-a-half minutes of pure Jimmy Jam and Terry Lewis, circa 1992. Snackable. This might be a late summer without parties, but whoever he is, Ex-Vitamins has put together a slyly jazz-adjacent party record that hits the ears like a mega-dose of B-12. 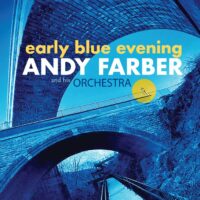 The pitch was not inspiring. Seeing the “Theme From The Odd Couple” on the track list earmarked Andy Farber‘s Early Blue Evening as yet another release by yet another rehearsal band led by a guy who thinks jazz history ended in 1974 and who looks like me. But Artist Share is not the kind of place to take your vanity project. Furthermore, any band that includes James Zollar, Art Baron, Carl Maraghi and Godwin Louis would be one very expensive hobby. So, this one earned a spin, and I’m glad it did. True, any of Farber’s 11 charts for Early Blue Evening could have been written before Thad met Mel, but they are all beautifully written and played with affection–and great precision, too–by these ace New York players. The Ellington and Basie bands of the 50s are a clear and acknowledged point of reference, but even those touchstone outfits had arrangements in their band books that weren’t nearly as good as these. Excellent solos by Baron, the last trombonist hired by Duke, and by the leader who on “Portrait of Joe Temperley” plays the saxophonist’s own instrument, stamp the passport on authenticity and seriousness of intent. Getting the wonderful Catherine Russell, whose lineage stretches to the idiom’s birth, to sing the concluding “How Am I To Know” only adds to the recording’s big band bona fides. Lesson learned: don’t judge a record by its cover. 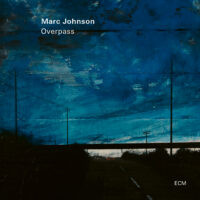 Bassist Marc Johnson exploded onto the scene in 1985 with “Bass Desires,” his ECM Records debut as a leader that featured a dream team of Bill Frisell and John Scofield, Charlie Haden and Peter Erskine. Since then he’s led or co-led 18 recordings, but none since “Swept Away” in 2012. For “Overpass,” Johnson adds to a category that Manfred Eicher’s label essentially invented: the solo bass record. Beautifully recorded in São Paulo, “Overpass” captures a beautiful instrument put through its paces from the opening bounce of Eddie Harris’ “Freedom Jazz Dance” to the cyclonic “Whorled Whirled World” that ends the 43-minute recording. Introspective takes on “Nardis” and “Love Theme from ‘Spartacus'” look back on Johnson’s tenure in the last of pianist Bill Evans’ trios, but the highlight is “Samurai Fly,” a retitled reprise of “Samurai Hee-Haw” from Bass Desires’ debut where the Nebraska-born bassist takes on the triple roles of himself, Scofield and Frisell on an overdubbed barn-burner of a barn dance. 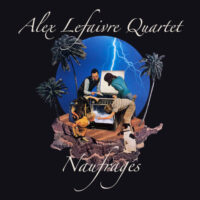 Naufragés (Arté Boreal) is the French word for castaways, but if taken as a self-descriptor, this music places the Montréal quartet led by electric bassist Alex Lefaivre  on an island squarely in the middle of the new musical mainstream, at least as it is practiced by the graduates of university or conservatory jazz programs. That means a lot of straight-eight grooves with some tunes in five or seven for contrast, rock-solid technique demonstrated by all players and a general avoidance and a cultivation of group sound. The greatest pleasures on Naufragés can be found in the hookup between the leader’s electric bass and Alain Bourgeois’ crisp drumming. Their hustling pulse balances the more lyrical instincts of guitarist Nicolas Ferron and Erik Hove’s soft-edged alto saxophone. The bright, lucid recording by Simon l’Espérance lets you hear every note of it. 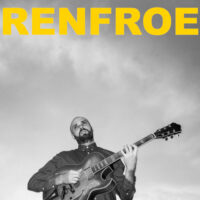 The cover image of “Run In The Storm” (self-released) shows Andrew Renfroe playing a hollow-body guitar, the kind of instrument you might associate with jazz. Drop the needle and you hear a very different sound, aggressive, heavy-gauge and biting. It’s the classic sonic signature of a Fender solid-body guitar (publicity photos show him hefting a Telecaster). Bill Frisell has long since made the jazz world safe for solid-body instruments, and Renfroe’s playing, more earthy than ethereal, leans heavily on the blues and the harmonic innovations of French modernist composer Olivier Messiaen. That’s an unlikely formula, but Renfroe, saxophonist Braxton Cook and the locked-in rhythm team of Taber Gable on keys, bassist Rick Rosato and Curtis Nowosad on electro-acoustic drums supply the heat that makes the alloy come together. The vivid recording only enhances the physicality of the Florida-born guitarist’s full-length debut.