Chris Hovan’s Trio, Grown in the Midwest, is 100 Percent Organic

On the day before he spoke with me for this piece, Chris Hovan’s active Facebook account, a worthy follow, by the way, featured a tabletop photo showed a CD jewel box  next to a glass of scotch. The caption read, “One of my top 5 Blue Notes, period!”

The CD was Grant Green’s Talkin’ About, a storied 1965 Blue Note Records release with Larry Young (Khalid Yasin) and Elvin Jones. That lineup of guitar, Hammond Organ and drums, just happens to have the same instrumentation as Hovan’s Organic Trio, the band that the Cleveland drummer will bring to Bop Stop for a Friday night concert. 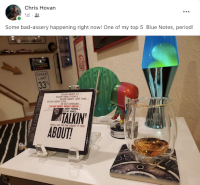 Hovan waved it off. In addition to being a writer and photographer with credits at Downbeat and All About Jazz (where, full disclosure, I am an editor), Hovan is an audiophile and an avid collector of high-end vinyl and CD reissues. He told me that he had read an announcement some years ago about a batch of Blue Note reissues that were never released. “We just assumed that they were forgotten. Well, they, they were not forgotten. They just came out, and [Talkin’ About] just happened to be one of those five titles. I just got them in the mail yesterday.”

Move along. There’s no story here. Still, Hovan concedes that in assembling his driving, hard-swinging drum style, he’s borrowed a few things from the Detroit-born drummer. Yet the model for the Organic Trio is a more recent aggregation.

“When you say organ trio, people have certain ideas of what that is,” he said, “But the model that I wanted to go with is the Larry Goldings, Bill Stewart, Peter Bernstein trio. To me, that is the pinnacle of an organ trio.”

That group is based in New York, and is an exemplar of that city’s particular tradition of organ trio playing. Yet the organ trio phenomenon achieved its full flowering in the archipelago of clubs, many in Black American neighborhoods, in the industrial cities of the Mid-Atlantic and Midwest. Hovan’s Organic Trio honors that legacy through the presence of Michigan natives Larry Barris on guitar and organist Cliff Metcalf.

Fittingly, the band’s godfather was Columbus B-3 master Tony Monaco who was teaching at Hope College in Holland, Michigan when in 2016, he invited Hovan to cover the college’s Organ Summit for All About Jazz (you can read that article here).

At the time, Metcalf was a student of Monaco’s at Hope. “He’s kind of a farm boy from Alma, Michigan, but he’s amazing jazz organ player,” Hovan said, adding, “He blew me away.” With Metcalf on board, Hovan formed a trio in 2018 that also included Columbus guitarist Derek DiCenzo. Michigan was the center of the band’s activity, but that created travel problems for DiCenzo, and when he bowed out, “I thought of Larry immediately,” Hovan said, “He has been with the group then ever since.”

Friday’s engagement marks a return to the venue where the trio of Hovan, Barris and Metcalf played their first gig in July 2019, though Michigan is still the band’s prime territory, with Detroit Fishbone’s and Detroit’s storied jazz room Cliff Bell’s among their prominent tour stops.

Hovan likes the music scene in Michigan, which, he said, “seems to have a lot of interplay with different genres. Cliff does blues gigs. He’s toured with [blues guitarist] Larry McCray and he’s done some work with [vocalist] Thornetta Davis. And Larry’s played with Martha Reeves and the Vandellas.”

For the Organic Trio, Hovan their versatility is employed in the service of original material. “I’m really trying to get more of my personal stuff out there,” Hovan said, including the Generations Quartet he has with bassist Taylor Arbogast, guitarist Chandler Carpenter and Mark Russo on trumpet. “And I really would love to do more with Larry and Cliff.”

He’ll do just that on Saturday at Pittsburgh Con Alma, but for one night, at least, Hovan, Barris and Metcalf will be right back to where they started from.

Chris Hovan Organic Trio, Friday, Jan. 20, 8 p.m. at Bop Stop, 2920 Detroit Ave, Cleveland. $20, available here. The concert will be livestreamed here at showtime. The stream is free to view but donations are encouraged and can be made at the ticketing page.

There’s never a bad time to get out and commune in the same room with creative musicians. Below are four musical events of interest in the coming week that you might want to check out.

Nothing much can stop the indefatigable Howie Smith from taking the bandstand, but when he came down with a nasty winter bug, the saxophonist reluctantly cancelled his Thursday night gig with The Uninvited, a percussion trio of Carmen Castaldi, Jamey Haddad and Joe Tomino. Not to worry. Haddad has stepped into the breach and invited guitarist Dan Bruce and Kip Reed to save the gig. And you’re invited.

Speaking of Bruce, he made a comment last year in these pages about the number of great guitarists on the Chicago scene. On Friday, one of them, Fareed Haque, comes to Akron with a starry trio of Chicago musicians in tow. Haque is a typical Chicago jazz musician who has played just about everything, from jam-band grooves with Garaj Mahal to the mysticism of Kahil El’Zabar’s Ethnic Heritage Ensemble. Chicago bassist Larry Gray might not be a big name, but he’s worked with members of the AACM and had a longstanding gig with guitarist Larry Coryell. The drummer in that group, Paul Wertico, got his big break with none other than Pat Metheny. ‘Nuff. said.

How is it, you might ask, that a concert featuring Grammy-nominated vocalist Thana Alexa and her drummer husband Antonio Sanchez, himself a multiple Grammy winner, isn’t the feature profile this week? Blame Winter Jazz Fest, the blockbuster New York event that consumed the attention of publicists, record company execs and journalists this past weekend. Not that this band, which also includes bassist Matt Brewer, keyboard player Maya Kronfeld and Jordan Peters on guitar, needs my endorsement. A concert this starry is self-recommending.

The fourth concert in this section, Sunday’s appearance by Grateful Dead cover project Jazz Is Dead at the Agora, has been cancelled.