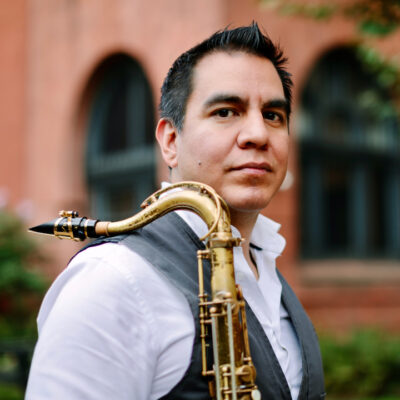 Saxophonist Diego Rivera‘s 2020 gig at Cleveland’s Bop Stop is one that he’ll never forget, but not for the usual reasons. The Michigan saxophonist’s engagement at the Hingetown club was the first event to have been canceled as the darkness of the COVID pandemic descended on a terrified world.

“We actually canceled the morning of the gig,” Rivera said in a Zoom interview. “This was going to be my first performance under my name at the Bop Stop, and we talked for quite a while trying to make this happen. I was really looking forward to it, but Gabe [Pollack, the club’s director] was incredibly professional, very gracious, and really supportive. He was like, ‘You know, it’s the right thing to do. Don’t worry about it. We’ll do this again.'”

Pollack was as good as his word and so this Saturday Rivera will bring a hard-charging quintet to Cleveland for a concert that’s been 25 months in the making.

Rivera’s name might not be familiar to most jazz fans. I was among them until Indigenous, his 2021 recording for the LA-based Posi-Tone label, landed on my list of the year’s ten best releases, alongside works by fellow saxophonists Steve Coleman, James Brandon Lewis and Shabaka Hutchings. Where has Rivera been hiding?

“I wonder that often myself,” Rivera said, “And I’ve been told that people have shared similar feelings, like, how did you do this? How did you figure this out?” 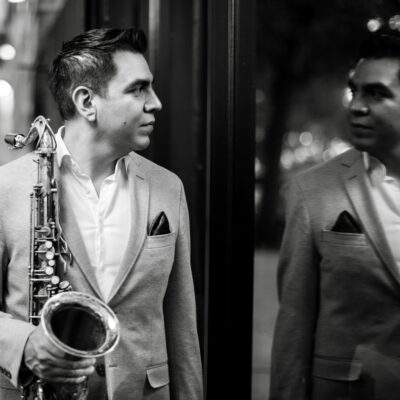 The answer is that the Ann Arbor native has spent most of his career hiding in plain sight in the thriving jazz community at Michigan State University where he is associate professor of jazz studies, saxophone and improvisation and associate director of jazz studies. As a student at MSU, he was mentored by drummer Randy Gillespie who toured with Wes Montgomery, and by bassist Rodney Whitaker. “They didn’t really do jazz education,” Rivera said. “So I didn’t really come up in a jazz ed sort of environment. They raised me in jazz culture–in Detroit jazz culture, where there’s a heavy, heavy educational component.”

Rivera also cited Detroit pianist Kenn Cox for pulling his coat about earlier generations of players. “He introduced me to Johnny Griffin, who became one of my biggest influences, Yusef Lateef, a huge influence, especially with his connection to Detroit, and Wardell Gray, also from Michigan, who  was very important because he showed me the pathway to transition from swing into bebop. And that’s all thanks to Kenn Cox. He knew exactly who I needed to check out.”

Like those tenor giants of years past, Rivera’s style is muscular and big-toned. He swings relentlessly. These qualities caught the ear of Posi-Tone Records founder Marc Free, who first heard the saxophonist when trombonist Michael Dease, a faculty colleague at MSU, brought him to a recording session. “Diego is the equivalent of a five-tool all-star,” Free said by phone from Los Angeles. “He’s fantastic arranger, fantastic composer, fantastic multiple instrumentalist who’s a great side person and a tremendous soloist who plays with feeling and emotion. And he’s not only a gifted  bandleader who’s a good communicator. He’s also an expert storyteller.” 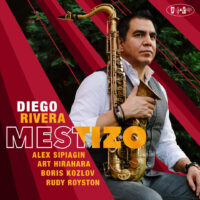 At the time, Rivera was preparing his application for tenure at Michigan State, an arduous process. Free expressed interest in recording the saxophonist under his own name and in 2019, his Posi-Tone debut, Connections, was released. The March 2020 Bop Stop gig was intended to showcase that recording, and in the interim, two more recordings, Indigenous and Mestizo, which was released in February, have hit the shelves.

All are excellent, madly swinging sessions featuring crack New York players. And all have a story to tell–about resilience and pride in Rivera’s Tejano heritage. “I was always raised with a strong cultural awareness,” Rivera said. “I always knew who I was. My mother traced our family back all the way to the to the Alamo. That was always very much a part of my upbringing: my family, my history, my heritage, what it means to be Chicano.”

As a teacher, Rivera is part of a heritage, too, a heritage of Detroit jazz and the players who created it. And he’s passing that heritage along to a new generation of practitioners who will join him at the Bop Stop. Bassist Javier Enrique from Miami and Twin Cities pianist Jordan Anderson both studied with Rivera. Fellow Ann Arbor native Sean Dobbins, with whom Rivera has played for about 30 years, will be on drums while veteran Detroit trumpeter Dwight Adams will join Rivera on the band’s front line.

The saxophonist is eager to make up for lost time. “That’s a great little club,” Rivera said. “I’ve played the Bop Stop with Rodney Whitaker, but this will be the first time I’ve played under my own name.”

And if you didn’t know that name before, you will now, and getting to know Diego Rivera will be well worth the wait.

Diego Rivera Saturday, April 9 at 8 p.m. at Bop Stop, 2920 Detroit Ave., Cleveland. In-person $20 available here. The concert will be livestreamed at Bop Stop’s Facebook page. Viewing the stream is free but donations to the band and the venue are appreciated and can be made here.