I get a lot of music for my consideration, more than 325 new releases so far this year. Almost all of them are notable for something, and I’d like to give them their due. So every week, I’ll do quick hits on the releases of the preceding seven days. it’s a great writing exercise, and a lot of fun, too.

Labor Day is this weekend and the prospect of hearing ensemble jazz of any kind seems very far away. When the ensemble crowds more than a dozen players onto the bandstand, most of them playing instruments activated by the breath, big band performances are likely to be the last to return.

Yet at a moment when things couldn’t get much stranger or more ironic, here comes one of the richest crops of big band recordings in a long time. 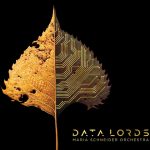 The one that’s getting the most notice is “Data Lords,” the new collection of music from the Maria Schneider Orchestra. What you’ve heard is true. Everything you expect from Schneider is present: the billowing, ear-filling textures, the Maxfield-Parrish pearlescence of the instrumental colors, the bigheartedness. It’s what you don’t expect that makes this two-CD ArtistShare set a milestone in Schneider’s exceptional career.

Call it darkness and vehemence. You don’t need to know the title of “The Lost World,” the opening composition of the first CD, “The Digital World,” to hear the desolation in the dun-colored, post-apocalyptic landscape Schneider creates. Ben Monder‘s guitar hovers over the ensemble, a malevolent presence. Glowering brass threatens and hammering drums raise a fist of raw power before a technically audacious Ryan Keberle trombone solo. Bugle calls emerge from curdled, Kurt-Weill-ian muted trumpets in something that sounds like “Taps.” The title is Google’s now-abandoned themeline, “Don’t Be Evil.” So much for Minnesota Nice.

You won’t find “Data Lords” on Apple Music or Spotify, nor, for that matter, in a clip that I could link to below. Schneider was one of the first artists to call out the dangers of digital music and has offered testimony before Congress. The steadfastness and length of advocacy gives the work a terrifying gravity. Yet even on the first CD, there are moments of light.

“CQ CQ, Is Anybody There?” with its cloud of Morse-code rhythms (including SOS), is dedicated to her father, whose ham radio hobby is painted as a quaint and benign form of electronic communication. “Sputnik” with its ribbons of accordion arpeggios by Gary Versace and a hint of a balalaika melody, would make a fine theme for a documentary on the Russian space program. “Data Lords,” the final composition on the first CD, steals in quietly as telegraphic little figures pile up in the orchestra like an accumulation of random data. What do they mean? Mike Rodriguez’ pure-toned trumpet seems to offer an answer as if from a great distance, but, bathed in effects and answered by Dave Pietro‘s writhing alto, the meaning isn’t clear. As the band rises to a climax, the music collapses in on itself and shatters into twinkly shards. Bye-bye Death Star.

This is a tour de force, not just of orchestral writing but of pictorial music. Schneider’s ability to conjure tone paintings is, of course, well-known and the second disc, “Our Natural World,” returns her to familiar ground. “Sanzenin,” was inspired by Japanese temple gardens, but the night sky over Versace’s ambling accordion is the same one rises over the Minnesota prairie. “Look Up,” she tells us in a piece that is classic Schneider nature-painting at its best, which means without peer. It’s hard to think of a jazz composer—any composer, really—who summons the wonder of natural world with more skill and sympathy. The brief, playful “Stone Song” and lyrical “Braided Together” lead us to the heart of Schneider’s mastery, the soaring lyricism of “Bluebird” and the churchy “The Sun Waited for Me,” a hymn righteously preached by the Rev. Donny McCaslin on tenor.

We have a lot to be thankful for if we’re not too distracted to notice, Schneider seems to tell us in her gentle, generous way. As a reminder, it’s a message that couldn’t be more welcome. Neither could this important—and yes, awesomely beautiful—music.

Jazzing the classics has tempted leaders of big bands since Duke Ellington tagged “Black and Tan Fantasy” with Chopin’s “Funeral March” in 1927. That one worked, mainly because of the playfulness and rebellion it suggested. Other arrangers let themselves be crushed under the velvet drapes of excessive reverence or lured onto the rocks of bombast (I’m looking at you, Stan Kenton). 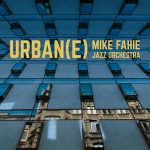 On “Urban(e),” an impressive new Greenleaf Music release, trombonist Mike Fahie steers a middle course. He’s not trolling the longhairs, but neither is he prostrating to them. Fahie simply does what resourceful jazz composers have always done: take juicy material and make something interesting of it.

And what juicy material. The Three Tenors might have vaulted Puccini’s “Nessun Dorma” into the popular consciousness, but Chet Doxas‘ tenor solo beats them on matters of taste and creativity. The brassy fanfare that concludes Stravinsky’s “Firebird” ballet should be raw meat for big band composers, but Fahie wisely refuses the bait. Instead, he opens his arrangement with the mysterious, shimmering music that precedes the big finish and shows off his orchestra’s command of color. Graceful, too are the charming arrangement of Debussy’s piano prelude ” The Girl with the Flaxen Hair,” and the almost Basie-esque tiptoe rhythm to which he sets the 5/4 second movement of Tchaikovsky’s “Pathetique” Symphony. The centerpiece, and I suspect Fahie’s favorite child among the seven arrangements here, is the setting of the Allegro Vivace third movement from Bartok’s First String Quartet. Without a hummable theme or glittering orchestration to recommend it, the knotty, angular piece would seem an unlikely choice for the big band treatment. Yet it gets the Canadian-born trombonist’s best work as an arranger. It’s episodic for sure, but the shifting, additive rhythms and abrupt mood changes present a challenge that Fahie nails in impressive manner. Quoted in publicity materials for “Urban(e),” Fahie said, “I listened to all six string quartets and when I settled on this one, the arrangement nearly wrote itself!” Sure it did, Mike. Canadian humility at its finest!