It’s been a minute since I’ve done one of these, choosing to concentrate instead on previewing live music events in Northeast Ohio. With few of those on the horizon, and needing to get into a posting groove, here’s a look at some interesting new releases that dropped in the past week. Note: my review of Fred Hersch‘s “Breath By Breath,” will be published at AllAboutJazz.com. I’ll post a link when it’s available. 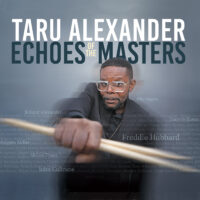 In jazz, bloodlines often count for something. Drummer Taru Alexander is the son of Boston-born saxophonist Roland Alexander. Though he was never a star and didn’t record widely, the elder Alexander has played with a wide range of high-profile musicians, the kind of player who forms the essential  connective tissue of a vibrant scene. Alexander the younger (he’s 54) seems to be following in his father’s footsteps; All Music lists 11 sideman appearances with artists as varied as Fred Ho and Abbey Lincoln, but “Echoes of the Masters” (Sunnyside Records) seems to be his debut as a leader. Like a lot of debut recordings, it’s eager to make an assertive first impression, and shows off an athletic, hard-charging band. Behind the kit, Alexander throws down in forceful, post-Tony-Williams style. Antoine Roney is the only horn, but his dry, forthright tone on tenor saxophone gives this session a gritty, cinema-verité edge. Rashaan Carter is mountain-strong as always, but the revelation for me is pianist James Hurt, originally from Memphis, who summons Tyneresque thunder with his left hand while spinning florid runs with his right. He’s a postbop Phineas Newborn by way of Mulgrew Miller, and full of surprises. 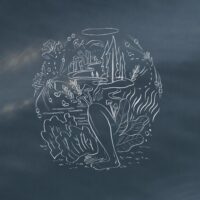 The genre tags Bandcamp has chosen for vocalist and composer Claire Dickson include jazz, alternative, ambient, indie pop and–I love this one–Brooklyn. Bullseye, but a more accurate geographic descriptor might be polar. Dickson conceived the music for “Starland,”, her self-released debut EP, on a tall ship sailing in arctic waters. When Dickson whispers her poetic, small scaled vocals, you can almost see her breath hanging in the chill air. Overdubbed vocals shimmer like the northern lights over the gentle throb of synths, a eerily accurate evocation of the horizonless Arctic landscape in the darkness of an endless late winter night.  If John Luther Adams wrote a song cycle for Laurie Anderson about the landscape of his native Alaska, it might sound like this. 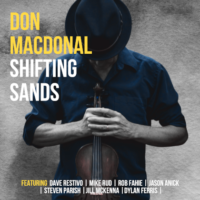 Don Macdonald is a violinist and composer from British Columbia, the province that gave us the Jensen sisters, Christine and Ingrid, Diana Krall, Kris Davis and a few male jazz musicians, too. I’m not sure Macdonald would identify himself as a jazz musician, and though his music incorporates subtle jazz elements, hardcore jazz nerds might choose to file “Shifting Sands” (self released) under instrumental pop. The nine songs make few demands on the listener, gliding by on a gentle breeze of Latin or Caribbean rhythms. These influences count more as subtle flavoring than point of musical departure, and with mandolin, guitar and the leader’s violin front and center, the spacious, unhurried vibe feels more Canadian than anything else. 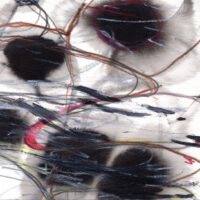 On a 2018 episode of Phil Freeman’s Burning Ambulance podcast, bassist Melvin Gibbs warned, “Scenes are anchored by venues. If we don’t have a venue where we can . . . consistently make this music, we’re not going to have a scene.” That’s the extinction event of 2020 in a nutshell, yet improvising musicians, always find a way. For saxophonist Tony Malaby, it led to a spot under an overpass of the New Jersey Turnpike where he invited friends and colleagues to play. The unusual conditions inspired Malaby and “The Cave of Winds” (Pyroclastic Records) is the result. Featuring his reconvened  Sabino quartet of bassist Michael Formanek, drummer Tom Rainey and Ben Monder on guitar replacing Marc Ducret, it’s one of his strongest recordings. On tenor, Malaby’s tone sounds both smokier and sweeter than I remember, a bracing shot of small-batch bourbon.  Formanek and Rainey go way back, both with Malaby and in Tim Berne’s Big Satan, and they navigate this sprawling, organic music with breathtaking virtuosity. Monder adds color and texture, sometimes recreating traffic sounds as he does on “Scratch the Horse,” a composition that somehow finds the place in the Venn diagram where death metal meets Coltrane’s “India.” Contrast that aggression with the bouncing “Corinthian Leather” based on Dizzy Gillespie’s “Woody ‘n’ You,” and you get an idea of the impressive range and endless invention that make “The Cave of Winds” one of the standout releases of the new year. 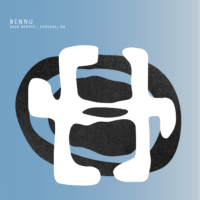 Like Malaby, saxophonist Dave Rempis solved the venue problem in 2020 by inviting friends to play outdoors. Recordings made in a park near his Chicago home found their way to “The COVID Tapes,” released last June on his Aerophonic Records label., but Chicago weather and the course of the pandemic eventually ushered in a sustained period of solitary music-making. When it was over, Rempis chose drummer Avreeayl Ra to accompany him back into a collaborative space. It was an inspired decision as “Bennu“ proves. Rempis can be a fire-breather, but the prevailing vibe of “Bennu” combines patience, curiosity and ease, a sigh of grateful relief after a long harrowing winter. Always listening, Ra is often content to generously settle into grooves, giving Rempis an open field in which to stretch out. Rempis responds with unhurried improvisations illuminated with the joy of discovery. It’s as though he stepped outside to find his familiar neighborhood filled with wonders. A word about the title: the Bennu was an ancient Egyptian deity in the form of a bird that created itself out of the darkness at the dawn of time.