You can’t blame bassist Noah Garabedian for hoping that the engagement Friday at Blu Jazz+ with his cooperative trio Ember will be a little less memorable than his last northeast Ohio visit. “Nobody was there,” Garabedian remembered.

That gig was with a different band in a different world. And if Blu Jazz+ is empty Friday night, it will mean that a lot of fans of improvised music in the Black American tradition will be missing one of New York’s most interesting ensembles.

Ember is a chordless trio that also includes saxophonist Caleb Wheeler Curtis and drummer Vinnie Sperazza. Northeast Ohio music fans might recognize this as the instrumentation of Birth, one of the leading bands in creative music for decades.

Though Garabedian plays double bass instead of the electric bass that Birth’s Jeremy Bleich employs, and Curtis mostly sticks to alto and soprano saxophones in favor of Josh Smith’s tenor, the bands share a similarity of approach and sound.

Like Birth, Ember can keep a slow burn going only to catch flame in an emotional climax, and both bands use familiar melodic devices and backbeat rhythms as stepping-off points for exploratory improvisation, as Ember did with the slinky title cut from No One Is Anyone (Sunnyside Records, 2021), the band’s debut album under that name. 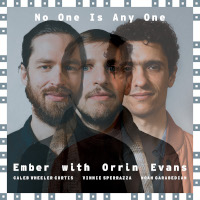 Listening to that record, you might be struck my how quiet much of it is. Sperazza can conjure a swirl of mystery with his brushwork and Garabedian’s bass is deep-toned and wise. Curtis can spin a lyrical line and explode into a held high note that has the bluesy cry of players such as Oliver Lake or Julius Hemphill.

“Caleb was one of the first musicians I ever met in New York,” said the Berkeley-native Garabedian on a recent video call. “He used to work at the old Jazz Gallery. So I met him just going to see shows. We became friends and we actually lived together for a while. I’ve also known Vinnie for a long time, and we’ve played a lot together. We were hanging out a bunch and playing sessions, and we just figured we should record.”

Through Curtis, the band brought pianist Orrin Evans in as a frequent special guest, and the Philadelphian fits right in with Ember’s inside/outside conception. “Whenever his schedule permits, we include him as well,” Garabedian said.

While Ember’s playing is intuitive with a unanimity of purpose, the band’s book of compositions is built from contributions by the individual members. But, Garabedian says, “We memorize all of our music, which is a big thing. The music’s not super complicated, but we try to have it all memorized so we can play freely in the set.”

In Akron, that set will surely include “Cleveland.” “I wrote that song in like 10 minutes after seeing a Joe Lovano concert,” Garabedian said.  “It’s just something that I kind of imagined Joe playing.  I don’t really know him personally, but he seems like a pretty special person in that he can adapt to any situation and make anything sound like Joe Lovano no matter where he’s playing or who he’s playing with.”

Ember might be seen as a way to map that individuality of sound onto a band setting. “It’s more than a band,” Garabedian said of Ember. “It’s this place for us to talk and learn and develop, and it’s a very supportive situation. Our rehearsals are usually just us talking, to be honest. Then we’ll improvise for 30 minutes and then we just talk a little more. We were just at a music residency in New Hampshire, and we basically wrote music every morning, and then recorded every afternoon for a week straight. So hopefully, we’ll have a new album coming out again soon. And it’s a great band.”