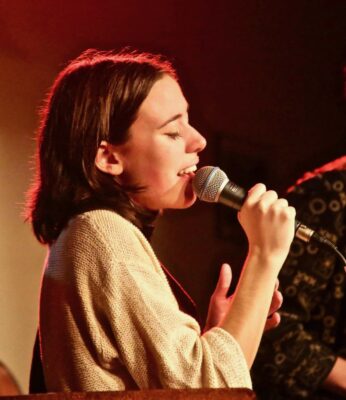 A good measure of the health of a scene is the different kinds of venues that present the music.  You expect to find jazz at outdoor festivals, college music departments, concert halls and, of course, in jazz clubs. And yes, all music scenes have taken hits over the last 23 months, but the appearance of a jazz concert on a Sunday afternoon at a public library has to be taken as a hopeful sign.

Iris’ name might be unfamiliar, but its owner is not. She’s the artist formerly known as Céline Opdycke, who changed her name, she said, “to make it easier on everybody” and to prepare for the next phase of a singing and acting career that began in Cleveland.

If the 23-year-old Oberlin graduate’s new name exudes the faint perfume of Gallic elegance, that’s no coincidence. Her mother is French-Armenian and Iris attended a French-American school while growing up in Seattle.

“Until I was 12 or 13, I was speaking French and English, but it was it was mostly French at home,” she said. Iris is slowly adding songs sung in French to her repertoire, but at the library, the setlist, with standards by Cole Porter, Frank Loesser, Jerome Kern and Harold Arlen, has a distinctly American accent.

These are songs that every major jazz singer has contended with, and Iris has heard and admired the results. “I listened to–and still listen to–a lot of vocal jazz, but 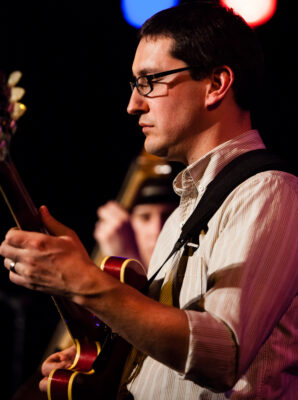 I also listen to a lot of instrumental jazz,” she said. “I think that in a way, I’m more influenced by the instrumental side of things than the vocal side of things. I was always more fascinated with imitating the sounds that I was hearing coming out of a trumpet or saxophone than a particular singer.”

Like jazz singers Sarah Vaughn and Carmen McRae, two of her lodestars, Iris plays piano, though she hasn’t considered serving as her own accompanist. “I find that I feel more free when I can focus fully on my singing.”

That focus includes an intense study of the lyric and the shape of the narrative it expresses. “When I go up on stage and I sing a song, I  like to tell a story,” Iris said. “I tend to take a more dramatic stance on the story. A big part of my preparation for a show is [to] sit down with the lyrics and read them like a poem and figure out where it is that I want to put inflections and what is it that I’m trying to put across with the song.”

Intense preparation needn’t be a barrier to freedom, though, a point not lost on Bruce.  “I love vocalists that obviously can sing the tune and catch the emotional point of the tune, but then if they want to, or if the band is going there, they also have the musical chops to be able to stretch out a little bit,” he said. “I’ve heard [Iris] do a number of tunes where she was able to really stay within the tune, but make it her own in a really nice way, which is pretty amazing at her age.”

When Bruce was approached about the library gig, he sent a text to Iris asking her to join him. She was more than happy to accept–and happy about the venue, too. “I thought it was super cool, because I like the idea of sharing art in a public space–and in a library, which holds art,” she said. “I consider books and literature to be art. So, it’s a really cool way of sharing more art in different mediums in a public space. It’s not in a space where people are expected to buy anything or consume anything other than to just be there and listen.”

And that’s good for you and good for the scene.