On any given day on any of the jazz fanboy groups on social media (and it’s overwhelmingly boys) you’re likely to run into images like this one.

They’re usually accompanied by a complaint that moans, essentially, “Why can’t things be like that again?” To which I might answer: have you looked at what’s happening in Cleveland this week?

In the four days from Thursday to Sunday, you can see:

Are you kidding me? And you can have Saturday night off to catch your breath (or a screening of Wes Anderson’s “The French Dispatch”).

It might not be New York’s annual NYC Winter Jazzfest in scale, but this weekend should provide plenty of high-calorie jazz nutrition for the Cleveland jazz fanboy or fangirl starved of live performances by the pandemic. Let’s take a closer look. 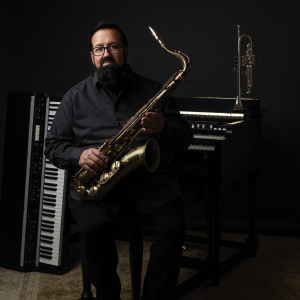 With the passing in September of Dr. Lonnie Smith, and with respect to elder statesman Eddie Baccus, Joey De Francesco is now the undisputed heavyweight champion of the Hammond B-3 organ. Since his earliest days on the Philadelphia scene Joey D has served up steaming portions of jazz comfort food designed to satisfy. It’s a formula that has gone in and out of fashion but has never lost its ability to connect with audiences, especially in places like Cleveland that have a deep history with this bluesy, theatrical music.

DeFrancesco has never demurred from giving the people what they want, but on his latest Mack Avenue Records release, “More Music,” he pushes new chips into the middle of the table. The organist, who has long stepped out from behind the keyboard to deliver crackling solos on trumpet, has added tenor saxophone to his bag of tricks. His rough-and-ready tone and deep-chested swagger evoke the friendly competitiveness of the teeming Philly club scene of several generations ago.

When the boss picks up a horn, Joey D’s new guitarist, Lucas Brown, slides onto the B-3 bench playing in classic Philly style. Don’t hold the gravy. Anwar Marshall, a Philly stalwart, sticks to the drums, but in music as rhythmic as this, you wouldn’t want him to be anywhere else.

“There is nothing like the sound of a Hammond B-3 in an intimate setting like the Bop Stop,” said the club’s director Gabe Pollack. “With a master like Joey D performing, you can really feel the vibrations of the music throughout the venue.”

Rolling into the Bop Stop on a work night, the Joey D band van is a three-man party bus, but even in a pandemic Thursday is the new Friday, right?

Joey De Francesco Trio will play two sets, 7 p.m. and 9 p.m. Thursday, November 18 at Bop Stop at the Music Settlement, 2920 Detroit Ave., Cleveland, Ohio. Tickets are $30 and are available here. Bop Stop policy requires all guests, staff, and performers to show proof of vaccination or produce a negative test result within 72 hours of entering to be admitted to a show. For FAQ’s regarding this policy please click here. 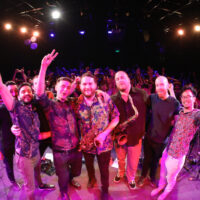 If De Francesco’s music calls back to jazz’s past as social music, New York-based guitarist, composer, and producer Shubh Saran offers a glimpse of its future at Mahall’s Locker Room on Friday. His tight, seven-piece formation features horns (including Shaker Heights native Brian Plautz on saxophone), two drummers and a bass player, Julia Adamy who just got off a tour with Michael League’s world music group Bokanté.

Saran who has lived in India, Canada, Switzerland, Egypt and the United States, brings a lot of experiences to the music and they can all be heard on “Inglish,” his new self-released recording. Carnatic scalar patterns sail over thumping grooves while multiple saxophones riff away like a Dave Bartholomew horn chart for Little Richard. Jazz is an element for sure (the guitarist is a Berklee School of Music grad), but so is post rock, dance music and what Saran called “Indian fusion.” call “Inglish” Brooklyn Music.

“I wanted to try to make this music feel a little more like genre bending, outside of the jazz or not only just jazz world,” Saran said. “When we were trying to plan this tour, we wanted to find venues that were a little more genre agnostic. I think we were trying to avoid the jazz clubs to hopefully bring other people to see the shows. I hopefully made the right call.”

Shubh Saran with special guest Kultures will appear in concert at 7 p.m. and 9 p.m. Friday, November 19 at Mahall’s Locker Room, 13200 Madison Ave., Lakewood, Ohio. Tickets are $15 and are available here. 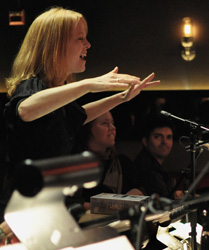 It’s easy to be seduced by the gorgeous surfaces and lapidary details of her compositions, but Maria Schneider is no miniaturist. Whether evoking the majesty of nature or the most intimate details of human emotion, she is a composer who works on a grand scale. Yet the scope and ambition of her Grammy-winning 2020 double-album “Data Lords” might make you sit up straight.

It’s protest music, a rebuke to the extractive violence of surveillance capitalism delivered with elegant fury, and it will form the centerpiece of the program when Schneider conducts the Cleveland Jazz Orchestra on Friday at the Maltz Center to kick off the orchestra’s 2021-22 season honoring women in jazz.

Schneider, a seven-time Grammy winner, is no stranger to honors, including a Pulitzer Prize nomination last year for “Data Lords.” “She has been regarded as probably the leading jazz composer of her generation for the last 20 years,” said trombonist Paul Ferguson, the CJO’s artistic director and a college classmate of Schneider’s. “So, this is a major cultural event for Cleveland, a major jazz event and, and a great chance for everybody in the CJO to grow as musicians.”

When Schneider last appeared with the CJO in 2002, Ferguson remembers that the normal schedule of two 75-minute rehearsal sessions was thrown out the window. “We went like three hours plus without a break just because the concentration level was so intense. I mean, she’s really a force of nature.”

Trombonist Scott Garlock, who is also the CJO’s executive director, agreed about the difficulty of the music, but added, “most all of our guys love to get their butts kicked a little bit. What she does is really singular. It’s so layered, and her ability to maintain angsty, emotional writing is unsurpassed, To get a chance to sink our teeth into arguably the world’s greatest [big band music] is a fantastic opportunity.”

It’s also a great chance to reflect on the richness of Cleveland’s jazz culture in 2021. These just might be the good old days.