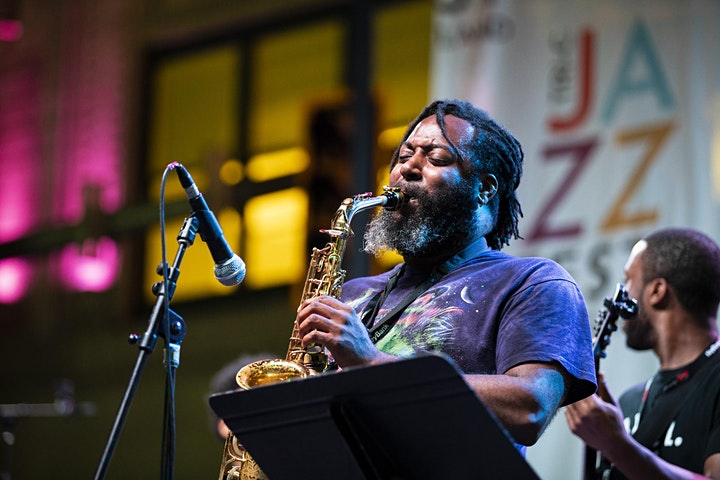 When Akron saxophonist and educator Chris Coles composed his “Nine Lives Project” as a response to the 2015 murders by a white supremacist of nine black parishioners at Emanuel AME Church in Charleston, S.C., anger was not on his mind. Even after the tumultuous events of 2020, “Nine Lives”chooses light over heat.

“The thing that this world lacks is grace,” Coles said. “We should operate under the under the assumption that everyone needs it.”

Grace is the offering Coles will make Sunday evening with his composition “Nine Lives” at a free performance at Tri-C Metro Campus Auditorium. 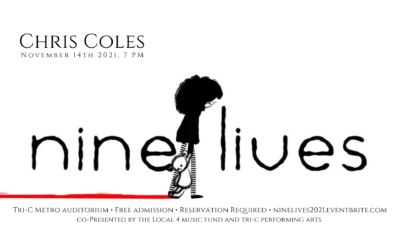 The 45-minute-long multidisciplinary performance that incorporates dance, spoken word and animated visuals grew out of a composition Coles wrote in the immediate aftermath of the mass shooting in 2015. He workshopped the music in a performance at Cleveland’s Bop Stop before taking it to Canada’s Banff International Workshop in Jazz and Creative Music.

Coles played the composition for his fellow students near the workshop’s end. “There was a really weird energy where, everyone was hugging each other, and crying, and I just didn’t know that I could do that, that I had that in me,” Coles said.

The eminent pianist and educator Vijay Iyer, the workshop’s director that year, urged him to pursue grant funding to expand the seed composition into a bigger piece, but Coles was initially ambivalent about the idea.

“2017 comes around and one of my mentors, Dave Morgan, who won a Knight Arts Challenge Award, said you should apply to do this,” Coles remembers. “And I applied for one on the premise that I make [“Nine Lives”] a bigger piece and you should write for animation and dance and spoken word.”

On November 14, 2017, four years to the day before Sunday’s concert, “Nine Lives” was announced as one of 17 of projects chosen from among 300 ideas submitted for the 2017 Knight Arts Challenge Akron.

As Coles worked on additional music for the project, the grant of $45,000 allowed him to bring in artists from the worlds of dance, spoken word and computer animation to add to the storytelling power of “Nine Lives.” “I didn’t give them much direction. I said, ‘This is what I’m thinking. Go  and deal with it and then we’ll just we’ll bounce ideas off of each other,'” Coles said. “Then each person came back with their portion of the collaboration, and we performed it for the first time in 2019.”

“Nine Lives” begins with a question: Are we spiritually stuck in the past? The music peers deeply into the past in an attempt to find an answer starting with a collective call to prayer in a roiling modal language powerfully reminiscent of John Coltrane’s “Alabama,” a composition written in response to the bombing murder of four Black girls in a Birmingham church in 1963.  Coles described the movement as “dedicated to blues, the negro spiritual and traditional jazz as we know it.” The second movement has strong echoes of the church and gospel music.  The third  takes its inspiration from hip-hop.  “It’s free. It’s my dedication to the trap aesthetic where there’s no beat,” Coles said. “The fourth movement is like church, rock–it’s like all those things. It’s my experience as a musician dealing with styles where all these things can coexist in one place to kind of signify us.  It’s transformation in a sense,” he said.

The performance at Tri-C will be the fifth time the work has been given before a live audience, though a video of the piece was filmed last December. Coles also recorded “Nine Lives” in 2019 for release and hopes to have CDs available for sale Sunday night.

Like many jazz composers, Duke Ellington among them, Coles wrote the music with specific players in mind, most of whom will be on stage at Tri-C on Sunday.  Joining Coles on saxophone are Bobby Selvaggio and Brad Wagner, trumpeter Tommy Lehman, Chris Anderson and Sam Blakeslee on trombones, and a rhythm section of  Theron Brown on keyboards, Morgan on bass, and percussionists Zaire Darden and Anthony Taddeo.  Emily Laycock is featured vocalist with MC Jul Big Green and spoken word poet Orlando Watson. Dominic Moore Dunson will perform his own choreography.

Coles is under no illusions that “Nine Lives”–nor any work of art—will solve the problems that haunt our society. “The suffering is going nowhere. We can’t end suffering, right? But what we can do together is help each other.” Coles said. “I can help someone bear it, and sometimes what that means is taking on hatred, and dealing with it with the opposite response.

I’ve been dealing with these nine lives, carrying them with me all this time. I’m hoping now that every decision I make honors those fallen souls. That’s how I’m choosing to try to live my life.”

Nine Lives, a multidisciplinary performance piece by Chris Coles will be given on Nov. 14 at 7 p.m. at Tri-C Metro Campus Auditorium,  2514-2534 E. 30th St., Cleveland, Ohio 44115. Admission is free, but reservations are required. Proof of vaccination, photo ID and masking is required for all audience members, staff and technical personnel.