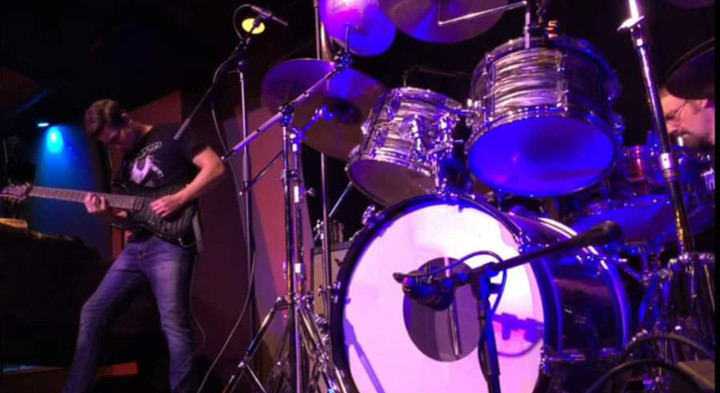 Tim Mirth has been experimenting with guitars for a long time. “As a 10-year-old, I found my dad’s guitar, this Gretsch Corvette,” he remembered. “I would sneak it out after school, play with it, try to figure it out. One day my dad comes by, and I thought, I’m not going to get to play with this anymore, but he totally knew me. He showed me a couple of things and ever since I haven’t been able to put it down.”

Thirty years later, he still has the Gretsch. one of the 20 or so guitars in his arsenal. Mirth will select a couple of them to the concert by his Night Terrors band that will open Bop Stop’s 2023 schedule, Wednesday, Jan. 11.

The band’s name might suggest a Nordic death metal outfit or a hardcore group, and Mirth’s earliest playing experiences did involve grinding out Nirvana and Pearl Jam covers in the lakefront community of North East, Pennsylvania.

But Night Terrors, a duo with percussionist Paul Stranahan, not only eschews covers, it began as a band that rejected any form of composition   “At first we were completely open,” Mirth said from his Hudson home. “but eventually we would write little themes that we could play together. We have some through-composed pieces, but with  very free, open parts to them, and it can go anywhere.”

Going anywhere is a theme that runs through Mirth’s life. A highly recruited swimmer in high school, Mirth chose the University of Mount Union, a smaller school where he could compete and still have time to study music.

The program at the Alliance, Ohio school required that students had to be in either the the chorus or the wind ensemble, neither of which included a guitarist. That was fine with Mirth who inspired by John Coltrane picked up the tenor saxophone for the first time just one week before classes were to start. By the end of his second semester, he and some friends had put on a composition recital that packed the theater.

“My ego was probably out of control, and I remember thinking, I need to go somewhere that’s going challenge me,” Mirth said, and he transferred to Boston’s Berklee School of Music. But wary of the cost, he took what money he had and, like thousands of aspiring musicians before him, headed to New York.

“Eventually it wore me down because I was working a lot but not playing very much,” Mirth said. “It didn’t make a lot of sense.” He returned to Pennsylvania and met the woman whom he would soon marry. When she left for the University of Akron, Mirth followed, eventually earning a jazz studies degree and one in electrical engineering, too.

It was in Akron that he started playing with Stranahan. “Paul started really getting into [saxophonist] Tim Berne, the free jazz thing” Mirth said. ”I think a lot of people that we were playing with really weren’t into it, but I was open to it. So we started separating the bookings. Paul Stranahan Insomnia was the fusion thing and for anything free jazz we would book that as Night Terrors.” The band issued a recording, Hear Again? (self released) last year.

These days, Mirth has expanded his portfolio of bands, founding Stellar Regions, about which, the guitarist said “is like–I hesitate to say–fusion, because that’s not really how I thought of it. But anytime you put distortion on guitar, it ends up being fusion. He also put together the Tim Mirth Guitar Band because, he said, “When you’re in the jazz scene, the guitar is the rhythm instrument, or maybe you do trio gigs, but you never have two guitars.”

While he’s upsizing his band list Mirth is considering downsizing his arsenal of gear. “I’m probably going to get rid of most everything and just try to focus on what happens if I just spend the next 10 years playing archtop.”

And he probably won’t want to put it down.